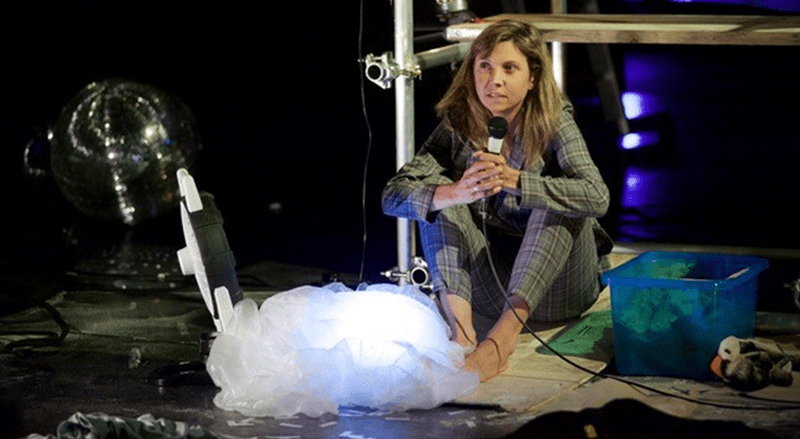 All of Me Panel 2: The Future of Making Work about Mental Health Themes

FREE – this event will be BSL Interpreted and Captioned

China Plate, Caroline Horton & Co and Pound Arts have co-curated a series of panel discussions around the themes of making work as an artist during the pandemic, discovering ways to make digital content, exploring new technologies and our aspirations for making work in the future, particularly around mental health themes.

The panels will take place during the launch week of Caroline’s new pieces of work based on her live show All of Me (the possibility of future splendour). From Monday 23 November audiences will be able to experience both audio and Twine versions of the original show (Twine is an open-source tool for telling interactive, nonlinear stories online) from chinaplatetheatre.com

All of Me (the possibility of future splendour)  is the grudgingly hopeful, occasionally funny, multi-award-winning stage show. An intimate, absurd exploration of wanting to live, wanting to die and what can happen if we sit together with the dark.

Please click on the Book Now button below to book a place and join the conversation. They will both be hosted on ZOOM and a link will be sent to you during the week of the event.

Aspirations for the future of making work about mental health themes

Caroline Horton is a theatre maker, performer, writer and director whose work has toured internationally since 2010. She was nominated for a 2013 Olivier Award for You’re Not Like The Other Girls Chrissy, which won The Stage Award’s Best Solo Performer when it opened in 2010. Other work for stage includes Mess (Traverse Theatre, The Stage Award 2012), Islands (Bush Theatre and British Council Showcase), Tranklements (New Vic), Penelope RETOLD (Derby Theatre) and Muckers (the egg, Bath and Conde Duque, Madrid). Caroline’s latest show All of Me, opened in Edinburgh in 2019, winning the Mental Health Fringe Award and a Stage Award before transferring to The Yard, London, the UK tour has been postponed due to Covid. She is currently working on commissions for Coventry 2021 and Corn Exchange Newbury, and developing a sequel to her first show You’re Not Like The Other Girls Chrissy with support from Arts Council England.

Ifeyinwa Frederick is a fervent believer in the power of storytelling and human connection, which fuels her work as a writer and entrepreneur. She began writing in 2016, joining Soho Theatre Writers’ Lab. Supported by the programme, she wrote her debut play THE HOES which received a full production at Hampstead Theatre in 2018. The play was shortlisted for the 2017 Tony Craze Award and Character 7 Award and longlisted for the 2017 Verity Bargate Award. Her next play SESSIONS – a co-commission with Paines Plough and Soho Theatre – explores the complexity of depression and the therapy process. Writing alongside her full-time job as co-founder of Chuku’s – the world’s first Nigerian tapas restaurant – she’s a Young British Foodie award winner and has been featured in Forbes’ list of 100 Female Founders in Europe.

Silent Uproar are an award-winning Hull theatre company creating ‘alternative theatre’. Making shows inspired by movies, comics, taboo topics, and comedy gigs. Our ‘alternative theatre’ is made for the young, the angry, the freaks and the geeks – anyone who is passionate about big ideas, pop-culture, and making the world a little bit better. Our shows are fun & thought-provoking nights out to share with your mates, that will be just as good as a comedy gig or a night at the cinema. Our work travels to venues big & small across the UK to entertain as many people as possible.

Viv Gordon creates work to campaign to increase visibility, voice and community with adult survivors of childhood sexual abuse (CSA).
CSA remains a taboo subject and is rarely talked about outside therapeutic support settings and, because of this, survivors lack cultural and political representation resulting in CSA survivors being the largest marginalised group most people have never heard of.

There’s an estimated 11 million of us.

VGC’s work seeks to remove barriers to participation for CSA survivors and drive narrative change moving away from ideas of victimhood, guilt, shame, isolation and cultural silencing towards celebrating survival, joining together and laying claim to cultural space to make noise about our experiences, rights and concerns. We do this through creative activities:  performances, installations, poetry, writing, workshops, campaigns, consultancy and more.