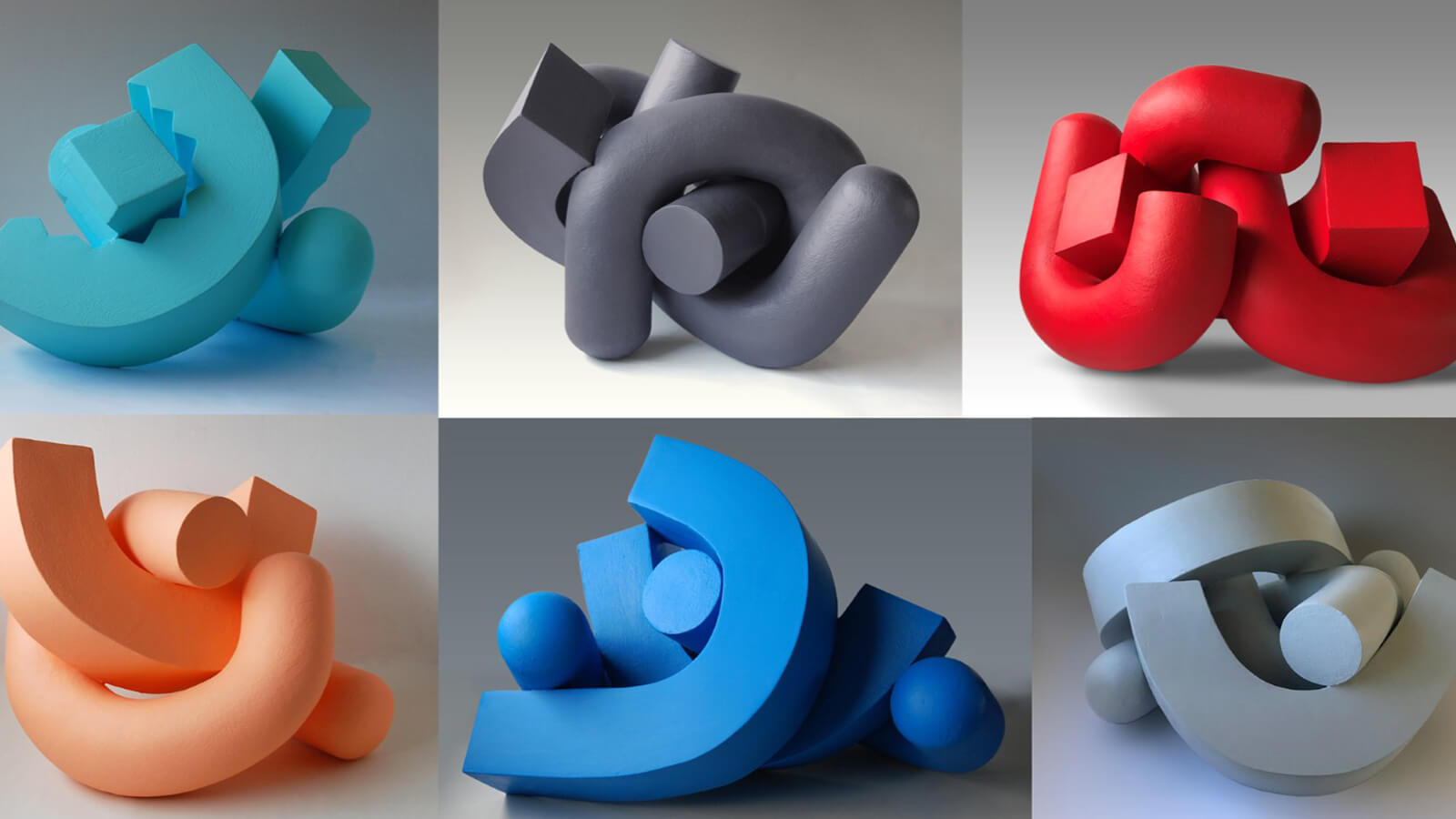 Whilst we are unable to bring the work of Patricia Volk to The Pound arts centre for Blue Sky Festival this year we’d still like to introduce you to this wonderful artist and her brilliant, bold ceramic sculpture.

As a sculptor, Patricia loves working with the directness of clay, using all the techniques, coiling and slab building, making one-off pieces, which are fired then finished with acrylic paint.

“My obsession is catching a very simple form or line, primarily, then enhancing it with colour. Sometimes I use juxtapositions of two forms that I hope suggest contradictions of strength and fragility, stability and precariousness – like the relationships between human beings. But also other opposites, such as rest and activity, that I hope give my work a lively presence and a sense of each one having an individual character. But really all this is open to the eye of the beholder. I never want to be to prescriptive, and in saying this much I’ve probably said too much.”

Born in Belfast, Northern Ireland, Patricia has been creating distinctive ceramic sculpture for over twenty years from her studio in Wiltshire. Her work follows the transition between her symbolic and semi-abstract heads, and her current work where the figurative element has been devolved to pure form and colour.

She has exhibited widely in this country and internationally; notably at Buekenholf-Phoenix Gallery in Belgium, Chichester Cathedral, the Royal West of England Academy. She was Regional Winner of the ING “Discerning Eye” prize in 2007 and shortlisted for the prestigious Brian Mercer Residency. One of her sculptures was also selected as a Southern Arts prize.

Patricia’s work has been acquired by public collections such as the Swindon Museum and Art Gallery, as well as the private collections of Lord Carrington, Mary Portas, Damon de Laszlo, Simon Relph CBE, and many others. In 2017 she was a guest speaker at the Ceramic Artists Association of Israel Symposium at Tel Hai and Jerusalem Museum.

In January 2019 she was commissioned by IT as part of the prestigious ‘ITV Creates’ initiative, making her sculpture visible on screen to millions of television viewers, and in 2020 was elected a Royal West of England Academician.

We look forward to bringing Patricia’s work to The Pound in 2021. In the meantime, please enjoy this short film, The Perfect Line, a sneaky insight into Patricia’s working practice.